Redwood National and State and states parks are in northern California and are a conglomeration of lands that were established 50 years ago. After more than 95% of the original old-growth redwoods had been logged at the beginning of the 1900’s, three major stands of magnificent trees were purchased by private citizens or privately funded groups and donated as parks. More recently, these plots were strung together with newly planted second growth to create a 105,500-acre set aside of public land. In the center of this chain of parks, at Mill Creek campground, I set up camp. This morning I am taking a break from biking the redwoods for hiking the redwoods.

Note: No biking on the trails of these parks are allowed.

The Boy Scout Tree: Often considered to be one of the best hikes of the Redwoods. This four-mile trail, (eight-mile loop) is popular hike and I was advised to get an early start if I wanted to enjoy the hike and end of the trail, fern falls, in solitude. Arising with the dawn I made a cup of espresso at camp and headed out.

This trail begins off Holland hills drive. Holland hills is a dirt road only one car width wide. As I am here in late September of a very dry summer the entire roadside is covered in an almost one-inch thick layer of dust. It is though you are looking at the world in sepia tones, everything has a brown tonality.  Every passing vehicle throws up billowing clouds of dust, covering you, filling your lungs and coating your bike and chain with dust. All this dust makes for a totally brutal bike ride! I do not recommend biking this, on this portion of the road.

At the tailhead, a wide, cleared, hiking path begins as an easy walk. The total elevation gain for the whole hike is only 750 feet. Along the way, grove after grove is filled huge towering trees. Somewhere after the first few thousand feet, one crosses an intangible threshold and enters a prehistoric world, a world where these trees existed alongside the new mammals. These giants stood and watched newly evolved whales swim, massive bears growling and three-toed horses trotting about. When all this first appeared, during the Miocene Epoch, 20 million years ago. These groves are all the things the redwoods are described as: overwhelming, sublime and spiritual. I hiked from one grove to the next half expecting to find a dinosaur munching on bushes.

These groves filled with soaring 700-year-old trees would be worth the walk alone, yet near the end is a side trail to the Boy Scout tree. Pictured above, there are no words which can adequately describe this giant. Being alone, I used my walking sticks to hold up my hat at my height. As you can see, my hat is barely visible. The girth is reported to be 27 feet across. I sat down to try and see the tops of this twin trunked goliath and wondered what was happening in our world 700 years ago when these two trees first sprouted? (Turns out: 1 in five people were dying from a violet death and a lot a poetry was being written in Ireland and Scotland.) 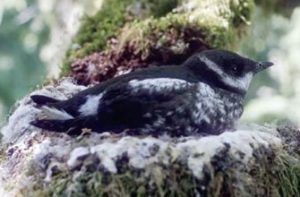 Fern falls is the termination point of this trail and sitting down on a fallen log to enjoy the peace of the space and sound of the creek. As I bit into my cookie, a loud flapping bird landed just a

few feet above my head, to my sheer surprise a Marbled Murrelet cocked her head, looking down at me. This bird of the Auk family nests only in old growth redwoods and hence is on brink of extinction. As over 95% of the Redwoods were logged by the 70’s this bird suffered from loss of habitat. Anytime you get to see an animal that is near extinction, from a Monk seal to a Murrelet, it is an honor. (Although this grey and white speckled bird is rather bland.) In addition to logging, the Jays have taken a liking to eating the eggs of this bird and its existence under a two-fold attack. 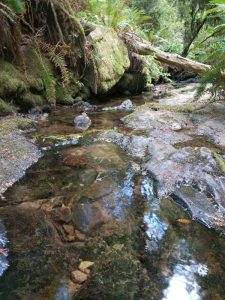 hiking instead of biking

After eating and making my way back down the trail I was met by group after group coming toward me. I was thankful for the solitude I’d had.

The afternoon consisted of a beach walk where I found washed ashore these egg sacks. It is a full moon and extra low tide which might be why these sacks were washed ashore.  Some Googling tells me these were Opal squid egg sacks. These sacks had a cross-hatched opalescence within them, again a new experience for me.

With darkness and fog setting in I returned to Mill Creek campground, exhausted. I crawled into my tent, settling down into my bag and fell instantly asleep.

PLAY
I am in northern California, playing. Hiking and biking in the Redwoods,…